Satisfaction rates after primary total knee arthroplasty are high; however, approximately 20% of patients are dissatisfied post-operatively. Post-operative satisfaction rates are largely because of limitations in physical function.1 The acquisition of knee flexion contracture after primary total knee arthroplasty contributes to a significant amount of stiffness. Post-operative stiffness leads to 58% of reoperations and post-operative interventions as well as greater than 25% of 90-day hospital readmissions.2–4 Knee flexion contracture occurs in 1.4 to 17% of patients and is thought to result in an increased prevalence in anterior knee pain which develops secondary to altered knee biomechanics shifting loading forces to the posterior aspect of the tibial plateau and increasing relational forces between the patella and the trochlea which make up the patellofemoral joint.5 Stiffness of the knee as described by the Knee Society, is “limited range of motion as reported by the patient and demonstrated in a physical examination.” With extension limited to 15 degrees short of full extension or flexion < 90 degrees which is not applicable if the patient’s preoperative range of motion is confined to < 75 degrees” and is a multifactorial complication of primary total knee arthroplasty.6    Despite wide recognition of the posterior myofascial chain’s involvement in flexion contracture, the development and treatment of fascial adhesions after primary total knee arthroplasty has not been thoroughly described and could contribute to a clinically significant therapeutic avenue to restoring function, reducing pain, and increasing patient perceived satisfaction rates. Fascial tissues form a network that are intimately associated with the musculoskeletal system and are thought to contribute passively to biomechanical behavior. Adhesion development between these fascial components post-operatively involves complex interplay and dynamic communication between extracellular molecules and cellular components that result in molecular remodeling of the collagen structure. This remodeling is orchestrated by cytokines stored and released in the extracellular matrix in response to acute and chronic alterations in load, as well as inflammation. The release of these fibrogenic cytokine products in response to local environmental stressors triggers a cascading effect mediated through Interleukin-1 (IL-1), tumor necrosis factor (TNF), and transforming growth factor beta (TGFb-1) to promote fibrosis, excessive fibroblast proliferation, and collagen matrix deposition.7 This increase in matrix deposition contributes to fibrosis within the fascial planes resulting in restrictions of motion. In addition to restrictions in functional motion, there is sufficient evidence to support the innate ability of these fascial fibrous components to actively contract and cause additional restrictive forces on knee range of motion.8   Therapies targeting the elimination and disruption of fascial adhesions after primary total knee arthroplasty in order to obtain full range of motion have been described. This includes bedside physical stretching exercises, extension orthosis, manual fascial release, manipulation under anesthesia (MUA), and Botulinum toxin A injections for spastic flexion contractures. In a prospective, double blinded, randomized clinical trial conducted by Smith et al. Botulinum toxin A injections at 1 year were proven to have statistically significant results regarding increasing post-operative range of motions; however, clinical significance may be limited.9 Degree of extension plays a significant role in patient reported satisfaction, and therefore much emphasis has been placed on novel therapies to reduce the extent of flexion contracture after primary total knee arthroplasty. Fascial hydrodissection under ultrasound guidance as described by Courseault et al. has been proven to have significant utility in the release of fascial planes secondary to adhesions which were the result of chronic hamstring injury. This treatment modality involved injection of lidocaine, bupivacaine, methylprednisolone, and normal saline directly into the interfascial planes releasing the connective fibrous tissue impeding motion and producing pain.10  Machida et al report a similar hydrorelease procedure for scarring after arthroscopic knee surgery in the infrapatellar fat pad.29   To our knowledge, the use of hydrorelease has not been described in the literature as an effective or potential therapeutic tool for the treatment of knee flexion contracture in patients who previously underwent total primary knee replacement. The present report details the results of a documented successful fascial hydrorelease of the soft tissue hamstring contracture as well as the anterior knee hydrorelease for acquired flexion deformity status post primary total knee arthroplasty.

A 63-year-old woman with a history of hypermobility and tobacco abuse underwent a primary right total knee arthroplasty. She reported excellent pain relief within the knee joint, but at her follow up postoperative visit, she reported posterolateral tightness and a sharp pain. She was only able to extend her knee to 155 degrees. Standing did not improve extension and she required a walker to ambulate. On the physical exam, her range of motion was 90-155 degrees. There were no neurologic abnormalities in her lower extremity. Despite physical therapy for 8 weeks, she was unable to achieve full extension of the knee.   Before undergoing a manipulation, she was referred to The Fascia Institute and Treatment Center for an ultrasound evaluation. She was noted to have a 25 degree flexion contracture of her right knee. A focused neurological examination was normal. The surgical site was well healed, but the surgical scar was immobile. She was tender along her patella tendon, iliotibial band and distal hamstrings. 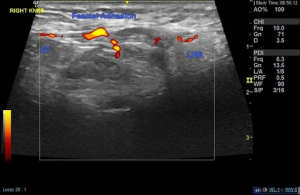 Because the patient completed aggressive physical therapy for an extended period without achieving full range of motion, the next step in treatment was to proceed with a fascial hydrorelease of the distal hamstring fibrotic fascia to allow movement of the knee. Risks and benefits of hydrorelease were explained, and the patient agreed to the procedure.  Hydrodissection    After identifying the sciatic nerve and popliteal vessels, an ultrasound-guided hamstring fascial hydrodissection (3.5-inch 25-G Tuohy needle) was performed with 5cc 1% lidocaine, 10cc normal saline, and 1 cc 40mg/ml methylprednisolone mixture. FIGURE B shows the ultrasound image immediately after the injection. Strength and sensation testing were normal after the injection. Immediately following the injection, the patient stated her posterolateral knee pain decreased and she gained an additional 7 degrees of knee extension. She was able to ambulate without the use of her walker but still had difficulty with full heel contact to the ground.  At her one-month follow-up appointment, she was satisfied with the results and reported progression in her knee extension and ambulatory capacity in physical therapy.  At this time, she reported being able to wean off using her walker and reported decreased tightness in the hamstring muscles, but she was still unable to fully extend the knee. She continued to report anterior knee pain over her patella tendon IT band and pes anserine tendons. On ultrasound evaluation, slight reactive hyperemia of the patella tendon was seen, as well as an adhesion at the patella fat pad. Another round of hydrorelease was performed, directed towards the patella fat pad, iliotibial band, vastus lateralis, vastus medialis, pes anserine, saphenous nerve and genicular nerve. The injectate consisted of a solution with 20 cc 1% lidocaine and 20 cc 50% dextrose, 35 total cc were used, 5cc injected at each area under ultrasound-guidance. The patella tendon adhesion, iliotibial band adhesion and hamstring adhesions were hydroreleased. The pes anserine tendon insertion site was injected, and the saphenous and genicular nerve received perineural hydrorelease.  The patient underwent 3 additional hydrorelease treatments, each at 4-week intervals. She noted continued improvement at each successive treatment session. Ultrasound-evaluation demonstrated continued decrease in hamstring, iliotibial band, and posterior patella fibrotic tissue. There was also a significant decrease in reactive hyperemia around the knee. The patient continued to participate in physical therapy while she was receiving her treatment.  Post-procedure Course  Twelve months following her primary TKA, the patient reported 100% improvement in pain. She had achieved full knee extension and did not require a cane to ambulate. She also reported losing 10 pounds because of her increase in activity. She continued to report occasional anterior knee pain, although it was reduced compared to the initial presentation. The patient was noted to have bilateral flexible pes planus with overpronation, and her knee pain was suspected to be due to altered gait mechanics and placement of excessive forces at her anterior knees. It was recommended she purchase stability shoes with medial arch support. The additional stability and support decreased anterior knee pain.

The development of FFD following primary TKA may occur because of a variety of contributing factors. Multiple studies have demonstrated that the presence of a pre-operative FFD is a positive predictor for the presentation of a post-operative FFD, although flexion contractures can be seen post-operatively in patients without a pre-operative FFD.11,12  The most common cause of immediate knee stiffness is pain and effusion, both of which resolve over time.13,14 Intrinsic technical errors that may contribute to post-TKA stiffness include: overstuffing the patellofemoral joint, mismatch of the flexion and extension gaps, inaccurate ligament balancing, femoral and/or tibial malrotation, joint-line elevation and excessive tightening of the extensor mechanism.15–19 Importantly, some patients may be biologically predisposed to the development of a FFD.20   Multiple treatment options exist for FFD following TKA, each with variable success. McGrath et al developed a custom-molded knee device to use as an adjunct to physical therapy for patients who had failed to improve their knee extension with conventional therapeutic methods. They found that 27 of 29 patients who underwent primary TKA achieved full extension after nine months of treatment with the custom-molded knee device.21 Finger et al reported a case of a patient with a post-TKA FFD who improved from 20 degrees to 12 degrees of flexion over the course of 28 sessions of physical therapy. The patient then began sleeping in a dynamic knee splint each night for eight weeks and additionally improved from 12 degrees of flexion to full knee extension.22 While these non-operative treatment strategies allow the patient to avoid undergoing an additional operation and anesthesia event, they require a considerable duration of time to improve range of motion.  Because our patient had completed physical therapy for three months and did not demonstrate improvement of her FFD, we elected treatment with fascial hydrorelease.  Hydrorelease is a safe technique used to aid separation along anatomical planes.23,24 A fluid is injected under pressure into the fascial planes with ultrasound guidance. Its reported uses includes the dissection of intra-abdominal adhesions in re-operative abdominal surgery, as well as for the use of preserving perforating arteries in breast reconstruction surgery.20,21 Courseault et al reported its utility in the treatment of chronic hamstring injuries, demonstrating in immediate reduction of pain and return to athletic competition.10 Machida et al report a similar hydrorelease procedure for scarring after arthroscopic knee surgery in the infrapatellar fat pad. In our case, fascial hydrorelease was used as an approach to release fascial adhesions detected on ultrasound imaging that were assumed to be the cause of this patient’s flexion contracture.   Our patient underwent 5 treatments of hydrorelease. At the conclusion of these treatments, 12 months after her surgery, she achieved full extension of her knee. Ultrasound-guided fascial hydrorelease for the treatment of FFD is a novel procedure, and this case demonstrates its capacity to offer patients a successful outcome. There is growing interest in the utility of ultrasound evaluation, as well as hydrorelease to evaluate FFD after a TKA. This case study highlights the need for larger scale studies to further investigate the success and safety of these procedures.  Further research must also determine which type of injectate provides optimal results.