A fascial hamstring hydrodissection can be used for acute and chronic hamstring pain. Hamstring injuries keep many out of recreation and competitive sport. Historically, hamstring therapy with physical therapy, massage, dry needling, and trigger point injections have been helpful but continue to result in delays in returning to competition. At the Fascia Institute and Treatment Center, we specialize in hamstring hydrodissection treatments for all levels of athletes. Specifically, we use ultrasound evaluation to determine the extent and area of injury. Once the area of injury is identified, we use a specialized hydrodissection technique based on the specific injury to heal the muscle quicker. In most cases, athletes return to full competition in 3-4 days, much quicker than the typical 4-6 weeks it may take to recover.

A 20-year-old college football defensive end pulled his left hamstring doing sled drills three days before clinical presentation. He felt a tearing, pulling sensation but did not feel a pop. He was able to walk, but abnormally. He could not run over the past two days because of hamstring pain and tightness. He has tried ice, medication, and massage, which have helped slightly decrease the pain but have not helped him return to running. A physical exam at the Fascia Institute and Treatment Center determined a likely grade 1 strain between the semitendinosus and adductor magnus muscle. Ultrasound evaluation confirmed the area of injury but also noted small fascial strains in the glute maximus and the long head of the biceps muscle. When we pushed over these areas, he confirmed a sensation of tightness. Interestingly, the MRI reported a more serious grade 2 injury, which was not the case after ultrasound review, which confirmed a more mild grade 1 hamstring injury. 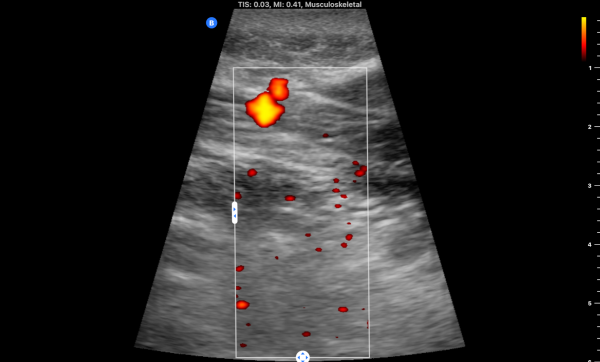 A college football player with a hamstring strain was noted on ultrasound imaging.

A fascial hamstring hydrodissection is a modern technique for treating acute and chronic hamstring injuries. In addition, hydrodissections can be used to treat other types of muscle injuries and nerve, tendon, and ligament injuries. Expertise in biomechanics, ultrasound, and hydrodissection techniques is necessary to treat complex sports injuries appropriately. After athlete safety, our goal at the Fascia Institute and Treatment Center is to return the athlete back to competing at the highest level of performance possible. Movement and medicine analysis with a fascia expert team is key to doing this. Make an appointment if you want to be assessed and treated for a nagging hamstring injury?