Neck and upper back pain can be common issues among athletes. Myofascial pain due to fascial adhesions can explain these athletes’ symptoms and prevent them from performing. In this retrospective series, three athletes diagnosed with myofascial pain syndrome at the medial scapular border are treated with ultrasound-guided (USG) hydrodissection. All athletes reported significant improvement in pain post-injection and were able to return to play without pain. The fascial hydrodissection technique can be an effective treatment for medial scapular myofascial pain.

The authors declare no conflicts of interest and do not have any financial disclosures.

The trapezius is a large superficial muscle of the upper and mid back, extending superiorly from the external occipital protuberance, medially over the spinous processes and inferiorly to the spinous process of T12, laterally over the scapular spine, and anteriorly to the lateral third of the clavicle (4). The trapezius superficially covers the medial scapular border, and deep to the trapezius and the scapula are the rhomboid major and rhomboid minor muscles. When the muscles undergo injury, they experience a set of phases of healing including degeneration, inflammation, regeneration, and fibrosis (5). Fibrosis specifically entails the excessive accumulation of extracellular matrix (ECM) components, either due to excessive ECM production, alteration in ECM degradation, or a combination of both processes (6). Within fascial cells, injuries have been found to trigger fibroblast recruitment and upregulation of N-cadherin, a protein which can promote cell-to-cell adhesion (7, 8). The negative space between the rhomboid muscles and trapezius may allow fascia to undergo fibrosis and develop adhesions to each other, causing limitation of movement and pain.

Interfascial hydrodissection involves injections within fascial planes, separating fascia from surrounding structures, including muscle, nerves, vasculature, or other fascia. Hydrodissection has multiple applications in treatment. We have reported the efficacy of hydrodissection in the management of chronic hamstring injuries in a prior case series (11). A case report describes hydrodissection of compressed dorsal scapular nerve and spinal accessory nerve to release from surrounding fascia, relieving numbness and pain in the upper back (12). Within the subset of postoperative pain management, anesthesiologists have described using hydrodissection to provide regional anesthesia as an alternative to epidural blocks (13, 14). Domingo et al. evaluated interfascial blocks to manage myofascial pain involving the trapezius, showing diffusion of a solution into the interfascial space in cadaver studies and effective improvement in pain in the clinical component of the study (15).

Ultrasound should be used during evaluation and intervention. Ultrasound is advantageous in that the modality is relatively inexpensive, well-tolerated by patients, allows dynamic evaluation of musculature and fascia in real-time and allows for serial evaluation to follow healing (16). Ultrasound helps to identify a fascial abnormality, provides the clinician real-time feedback as the patient confirms the location of pain, and allows visualization of the needle during the fascial hydrodissection.

Athlete 1 is a 21-year-old right-hand dominant male collegiate golfer who presented for evaluation of right upper back and shoulder pain. The pain severely inhibited his golf swing for over a year, and he had been unable to compete for two months before the presentation. He denied paresthesia or weakness of the upper extremities. On physical exam, he exhibited tenderness over the right medial scapular border. Ultrasound evaluation revealed fascial adhesions along the right medial scapular border, which were tender to palpation (Figure 1). The athlete agreed to proceed with a fascial hydrodissection. He was placed in the prone position. With ultrasound guidance (General Electric Logiq E), the adhesions were identified, and the injection site was sterilized. A 25-gauge needle was advanced into the interfascial space, and a solution of 4cc of 1% lidocaine, 4cc of 0.5% bupivacaine, and 1cc of 6mg/ml betamethasone were injected (Figure 2). The needle was removed, and the bleeding was controlled. Strength and sensation testing were normal post-procedure. The athlete noted an immediate improvement in pain, secondary to dorsal scapular nerve block and interfascial anesthesia. At follow-up four months later, amid spring college golf tournament season, he felt significantly improved but still had mild persistent pain along the right medial scapular border. Mild pain did not prevent him from competing. Repeat ultrasound showed fascial thickening in a more inferior trapezius-rhomboid minor fascial plane, which was tender to sonopalpation. The fascial thickening was significantly decreased compared to previous imaging. He underwent USG hydrodissection in a similar fashion to his first procedure with immediate improvement in pain and mobility.

Athlete 2 is a 19-year-old left-hand dominant male collegiate baseball player who presented for evaluation of left medial scapular border pain ongoing for five months. He presented to our clinic during baseball season. The pain had worsened over time with more recent difficulty throwing, and he could not compete. He denied paresthesia or weakness of the upper extremities. On physical examination, he had reproducible symptoms with palpation of his left trapezius along the medial scapular border. Ultrasound revealed fascial adhesions between the left trapezius and rhomboid muscles with tenderness to palpation of the adhesions. A USG hydrodissection was performed between the left trapezius and rhomboid muscles, as described in the previous athlete. Immediately after the procedure, the patient experienced nearly 100% relief of symptoms.

Three days after the procedure, the patient returned to practice. While reaching to catch a fly ball, he felt a strain in his left medial scapular border. He returned to our clinic three days after this injury for evaluation. The patient denied weakness or numbness in the extremity. Upon repeat ultrasound, there was a deep fascial adhesion noted at the medial scapular border, approximately 3 cm inferior to the region which previously underwent hydrodissection. This fascial adhesion displayed reactive hyperemia, suggesting an acute injury (Figure 3). This area of hyperemia was tender upon sonopalpation. USG hydrodissection in this region again provided nearly 100% relief of symptoms. Activity modifications and proper warmups were discussed with the athlete and his trainer. He was able to return to full play without limitation three days later.

Athlete 3 is a 13-year-old right-hand dominant female softball pitcher and outfielder who presented for evaluation of 1 week of right medial scapular border pain. Although she is in the 8th grade, she plays with the Varsity softball team. During a Varsity scrimmage game, she experienced pain with pitching and throwing from the outfield. She described the pain as a ‘pulling, crunching’ sensation at the right medial scapular border. The athlete denied numbness, tingling, or weakness of the extremity. On physical exam, she had right medial scapular border tenderness to palpation which reproduced her symptoms. On ultrasound, an adhesion between her right trapezius and rhomboid was identified, which was tender on sonopalpation (Figure 4). A right trapezius/rhomboid USG hydrodissection was performed in a similar manner as described previously. An immediate improvement in pain was noted. The athlete and her father were instructed to have the patient take 2 days of rest from practice then start working with the team trainer. If she was doing well, she could return to full play 4 days after the procedure. On a telemedicine visit 7 days after the hydrodissection, the athlete reported feeling great and was pitching without issue.

These three cases highlight dorsal scapular nerve block and interfascial hydrodissection as an effective method of treatment for myofascial pain at the medial scapular border. Athletes displayed both an immediate improvement as well as long-term resolution of pain. Myofascial neck and upper back pain may be more likely in patients presented here because they are heavily using their upper extremities in their sports. Findings of fascial thickening and adhesions on ultrasound at the point of tenderness, and immediate pain relief after dissection of adhesions, suggest that these adhesions do contribute to the pain. Domingo et al, after performing cadaveric interfascial injections, identified peripheral nerves in the interfascial space on histologic examination (15). With case reports of successful management of post-operative pain with interfascial nerve blocks (13, 14), pain relief can also be explained by the findings of innervation within the interfascial space. Metin Okmen et al investigated trapezius and rhomboid USG intramuscular injections in a double-blinded randomized trial (17). They concluded that deeper rhomboid injections were more effective than superficial trapezius injections for MPS. A study comparing injection approaches between interfascial and intramuscular could both explain etiology of myofascial pain and direct clinicians’ future approaches to intervention.

Ultrasound is a necessary tool for diagnosis and treatment of myofascial pain. At bedside, the clinician can identify a fascial abnormality and palpate that abnormality. When the athlete reports a reproduction of their pain based on sonopalpation, the clinician has real-time feedback to further direct intervention. The dynamic nature of this ultrasound examination, in addition to lack of radiation exposure and relatively low cost, makes ultrasound a more useful modality compared to MRI imaging for addressing myofascial pain. Additionally, when intervening with hydrodissection, use of ultrasound guidance allows clinicians to increase accuracy and decrease risk of damage to neural and vascular structures.

The physician performing the hydrodissection needs to be experienced in ultrasound. The spinal accessory nerve’s course traverses deep to the trapezius and superficial to the rhomboid. Although major blood vessels do not typically run within this superficial muscle group, the clinician performing ultrasound should identify and avoid any anomalous vascular structures. Possible complications of interfascial hydrodissection besides damage to surrounding structures include infection, pneumothorax, organ injury, excessive bleeding, formation of hematoma, lidocaine or bupivacaine toxicity, fat atrophy, skin discoloration, and post-injection flare (11). The clinician should maintain awareness of these possible complications and how to manage them, should they occur.

In the three athletes highlighted in this series, two athletes experienced decreased but continued pain during their sports season. Ongoing fascial pain may be secondary to fascial adhesions that were left untreated, or an acute fascial strain in already fibrotic tissue. The golfer required further treatment of fascial adhesions that were not initially addressed. The baseball player experienced an acute strain of a prior adhesion that was not treated. Therefore, if fascial pain is continuous, the clinician should re-evaluate the area of concern and treat other acute or chronic fascial abnormalities.

In the case of treating competitive athletes, it would be imperative to discuss with the athlete and their athletic trainer or physical therapist appropriate return-to-play protocols and prevent re-injury. When describing hydrodissection for hamstring injuries, we outlined a post-procedural rehabilitation protocol, with gradual re-introduction of movement and stretching leading to full return to play 4 days after hydrodissection (11). A longitudinal study of athletes with myofascial pain may help identify the most efficacious timing for hydrodissection. It is possible that hydrodissection during offseason may provide less frequent need for repeat procedures. However, amid the pressure to perform in competitive environments, sports medicine specialists need to discuss with athletes and trainers how to balance rehabilitation and returning to play.

USG interfascial hydrodissection is a quick, well-tolerated, and effective method of treatment for myofascial pain at the medial scapular border as presented in this case series. The use of ultrasound improves the technical accuracy of the hydrodissection. Ultrasound also allows the patient to provide feedback during the evaluation of the musculature and feedback, improving the likelihood of success even more. 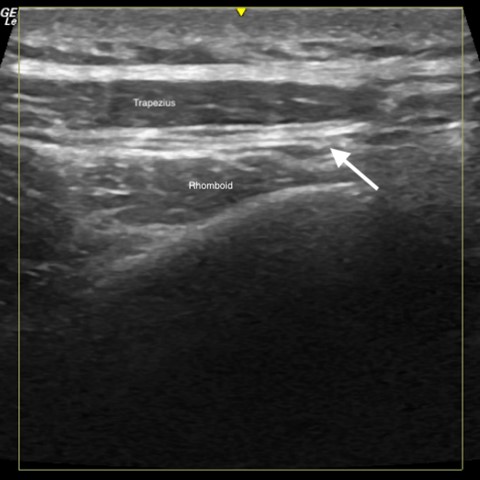 Ultrasound image of a fascial hydrodissection

Struggling with upper back pain? We are fans of AlignMed posture wear.