A 34-year-old hypermobile female who is 6 months pregnant comes to the Fascia Institute and Treatment Center after being stung by a wasp 6 weeks ago in the right forearm. She had an initial episode of severe inflammation along the forearm that resolved in about a week. However, she had continued to have pain at the site of the wasp’s sting that spread in an area about the size of a quarter. When she bent her wrist in flexion she felt tightness and pain in the area of the bite. When she also extended her wrist she felt a pulling sensation at the area of the bite. Since the initial period of inflammation, she has not had any further swelling and denied fevers, chills, or other signs of infection. She did not have any pregnancy complications. 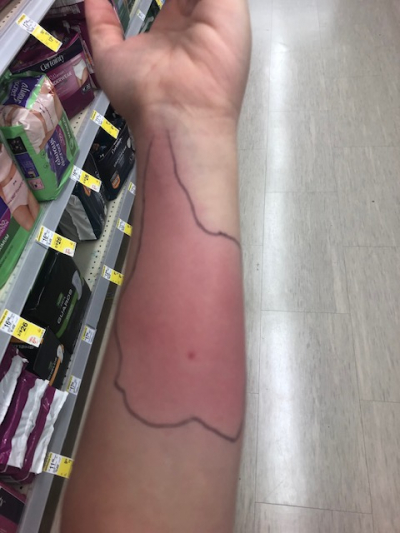 After hearing her story, which is unusual, we decided to perform an ultrasound evaluation at the Fascia Institute and Treatment Center to look for fascial abnormalities. She showed us the area of tenderness and with ultrasound Butterfly IQ+ ultrasound unit, we were able to identify the area of concern as noted in the picture. 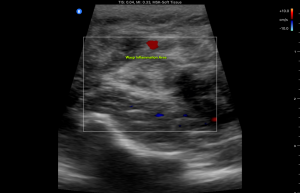 Ultrasound image of inflammation from the wasp sting.

Because of the fascial adhesion and area of inflammation, we decided to proceed with a fascial hydrodissection of the area around her wasp sting. Relatively immediately, she did note that there was no longer tightness with flexion and extension of the wrist and a significant decrease in the area of chronic pain.

Many unusual and uncommon injuries tend to be related to the fascia. In this particular instance, the hypothesis is that the wasp injected the patient’s forearm between fascial planes and likely within a fascial area in the muscle. Because certain areas of fascia or a type of scar tissue this area may not have received adequate blood flow to heal appropriately. In addition, the initial area of inflammation was likely mast cell-mediated, which we know the cells are highly prevalent within fascial planes. Fortunately, she is continuing to do well responded well to the fascial Hydro dissection, and will continue her pregnancy without the annoyance of forearm pain.

Have an unusual musculoskeletal pain issue? Let us evaluate you at The Fascia Institute and Treatment Center!